There is a range of hazards generated by volcanic activity. These include lahars, pyroclastic flows, lava flows, tephra, tsunamis and floods.

Lava, it’s all the same, right?

Surprisingly it’s not! Molten rock that erupts onto the Earth’s surface is known as lava. The temperature of lava ranges between 700 and 1200°C. Lava flows under the influence of gravity. However, as it cools it forms solid (igneous) rock.

Different volcanoes produce different types of lava. Lava composition varies in terms of temperature and composition, particularly their silica content. The hottest lavas with the lower silica content are quite runny. These are known as basic or basaltic lavas. They are able to travel long distances even over relief that is relatively gently sloping, before cooling and solidifying as basalt. At the other extreme lava that is relatively cool (around 700°C) with a high silica content form only slow-moving flows. Acidic lava, such as rhyolite, is an example of this type of lava.

Everything in the path of lava will be either burned, buried or bulldozed. Although lava flows tend to destroy infrastructure they rarely cause injuries or fatalities.

What is a pyroclastic flow?

A pyroclastic flow is a fast-moving current of hot gas and rock (collectively known as tephra), which reaches speeds moving away from a volcano of up to 700 km/h (450 mph). The gas can reach temperatures of about 1,000 °C. Pyroclastic flows normally hug the ground and travel downhill or spread laterally under gravity. Their speed depends upon the density of the current, the volcanic output rate, and the gradient of the slope. They are a common and devastating result of certain explosive volcanic eruptions. The inhalation of hot and poisonous gas and ash causes almost instant death. In AD 79 a pyroclastic flow from Mount Vesuvius overwhelmed the Roman city of Pompeii. 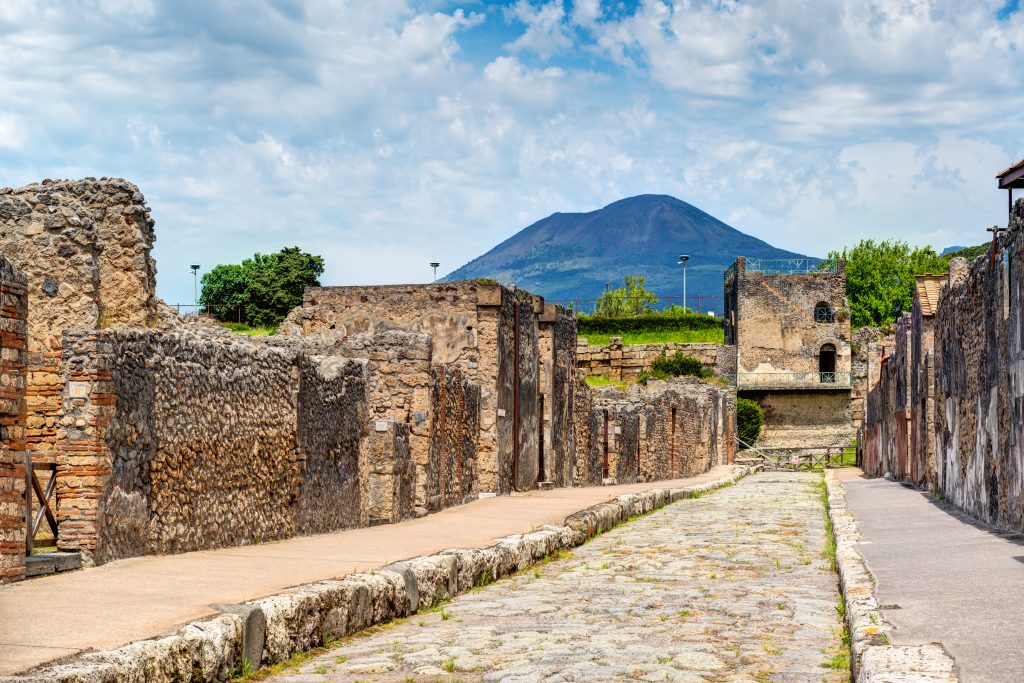 Street in Pompeii overlooking the Vesuvius. Pompeii is an ancient Roman city died from the eruption of Mount Vesuvius in 79 AD. Italy.

Tephra is any material ejected by a volcano into the air. This can be anything from fine ash to large volcanic bombs. Tephra is hazardous as it can cover agricultural land, destroying crops. It can also cause airspace to be closed. The 2010 eruption of Eyjafjallajökull led to the cancellation of 100,000 flights.

Volcanic eruptions release a wide range of toxic gases that include CO, CO2 and SO2. These pose a silent and deadly threat to human life. When SO2 combines with water in the atmosphere acid rain is produced. This pollutes surface water, enhances weathering and can damage crops.

Lahars are volcanic mudflows with the consistency of wet concrete. Lahars form when ash deposits, rock fragments and mud mix with water. The water can originate from heavy rainfall or melting snow and ice on, or above, a volcano. Lahars can travel at speeds up to 50km/h on a steep slope. Lahars can consume everything in their path, either destroying it or burying it under layers of debris. 23,000 people died as the result of lahars following the eruption of Nevado del Ruiz in Columbia in 1984.

Violent volcanic eruptions can cause significant displacement of ocean water. This can occur where there are island or undersea volcanoes. Tsunamis can travel at speeds up to 600km/h. In deep water, they can have a height of only 1m and a wavelength of up to 200km. As they approach the shore they rise in height and break, transferring huge amounts of energy and water along the coast and inland.

Most hazards posed by volcanic eruptions tend to be short term. However, eruptions that release large quantities of ash into the upper atmosphere can lead to longer-term climatic change. Eruptions from super-volcanoes in the past have led to global temperatures decreasing as ash blocked the sunlight. An example of this is the eruption of Toba, Indonesia between 69,000 and 77,000 years ago.