Structure of the Earth

Our planet is made up of three main layers: crust, mantle, and core. 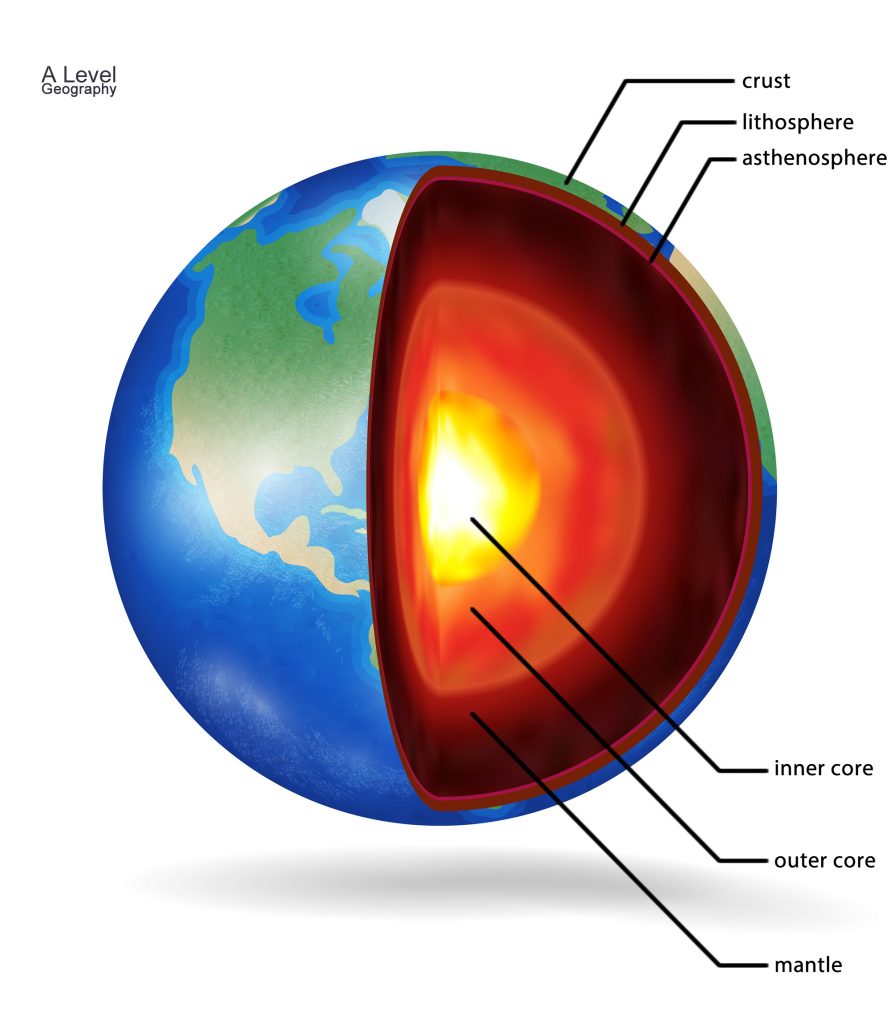 The structure of the Earth

The crust is thin and rigid. Beneath the oceans, the crust is at it thinnest extending only around 5km in depth. Although the depth of continental crusts varies it averages around 30km in depth. However, where large mountain ranges exist the crust can be as deep as 100km. The thickness of the crust is said to be equivalent to a piece of paper forming the skin of a basketball!

The boundary between the crust and the mantle is marked by the Mohorovicic discontinuity, or Moho as it usually abbreviated. The mantle is a dense, hot layer of semi-solid rock approximately 2,900 km thick and contains more iron, magnesium, and calcium than the crust is hotter and denser because temperature and pressure inside the Earth increase with depth.

The upper mantle consists of two layers. The layer that extends from 100 km down to 300 km is known as the asthenosphere. This layer is semi-molten or viscous and is capable of flowing slowly. Lying immediately above this is the lithosphere, a rigid layer sandwiched between the crust and the asthenosphere.

It is believed that within the aesthenosphere convection currents exist formed from the intense heat in the low mantle. As a result, the semi-molten asthenosphere flows carrying with it the solid lithosphere and crust.

At the centre of the Earth lies the core, which is near twice as dense as the mantle because its composition is metallic rather than stony. It is comprised of Iron (80%) and Nickel (20%). The Earth’s core is actually made up of two parts: a 2,200 km-thick liquid outer core and a 1,250 km-thick solid inner core. As the Earth rotates, the liquid outer core spins. This creates the Earth’s magnetic field.

Not surprisingly, the Earth’s internal structure influences plate tectonics. The upper part of the mantle is cooler and more rigid than the deep mantle; in many ways, it behaves like the overlying crust. Together they form a rigid layer of rock called the lithosphere (from lithos, Greek for stone). The lithosphere tends to be thinnest under the oceans and in volcanically active continental areas, such as the Western United States. Averaging at least 80 km in thickness over much of the Earth, the lithosphere has been broken up into the moving plates that contain the world’s continents and oceans. Scientists believe that below the lithosphere is a relatively narrow, mobile zone in the mantle called the asthenosphere (from asthenes, Greek for weak). This zone is composed of hot, semi-solid material, which can soften and flow after being subjected to high temperature and pressure over geologic time. The rigid lithosphere is thought to “float” or move about on the slowly flowing asthenosphere.
[WpProQuiz_toplist 8][WpProQuiz 8]Share