Coastal landforms of deposition occur where the accumulation of sand and shingle is greater than it is removed. This is particularly the case where constructive waves are prevalent or where there is an abundant amount of beach material supplied.

Beaches are dynamic environments which for the buffer between land and sea. They have 3 main components, the nearshore (where the land begins to affect the sea), the foreshore (surf zone) and the backshore (usually above the high tide mark). The backshore typically features the material deposited by storm waves.

The strong swash of a constructive wave deposits the largest material at the top of the beach. As the upper beach builds up, the backwash becomes even weaker because a greater proportion of the water drains away by percolation, rather than running down the beach. The weak swash of a destructive wave deposits material at the base of the beach. It cannot advance further up the beach because it is destroyed by the backwash from the previous breaking wave. Ridges and runnels form parallel to the shoreline in the foreshore zone. Ridges are areas of the foreshore that are raised above the adjacent shore which dips into a runnel. The runnels are disrupted by channels that help to drain the water down the beach. 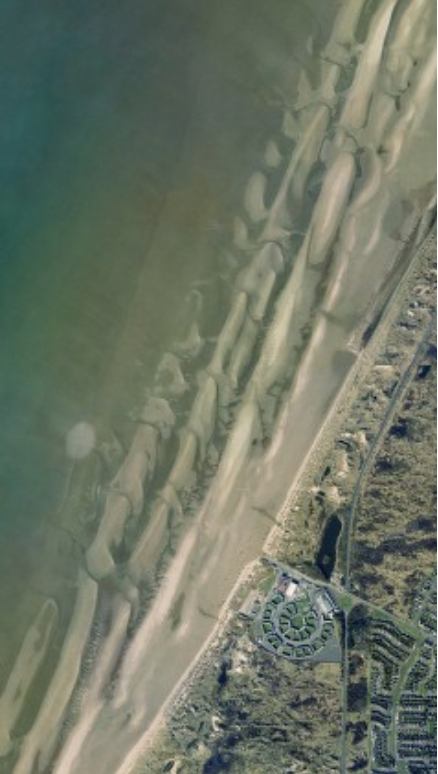 If you were to look at the cross-section (see below) it would appear similar to that of hills and valleys but at a much smaller scale. 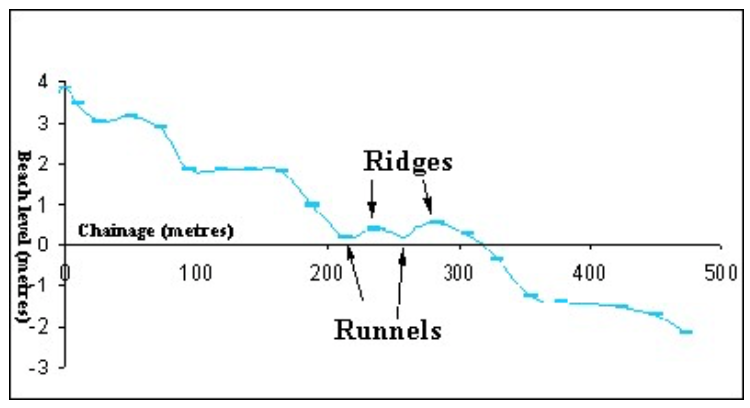 Ridge and runnel systems are formed due to the interaction of tides, currents, sediments and the beach topography. They only form on beaches with a shallow gradient. They form as a simple drainage route for tides. Water flows in and out via the runnel. 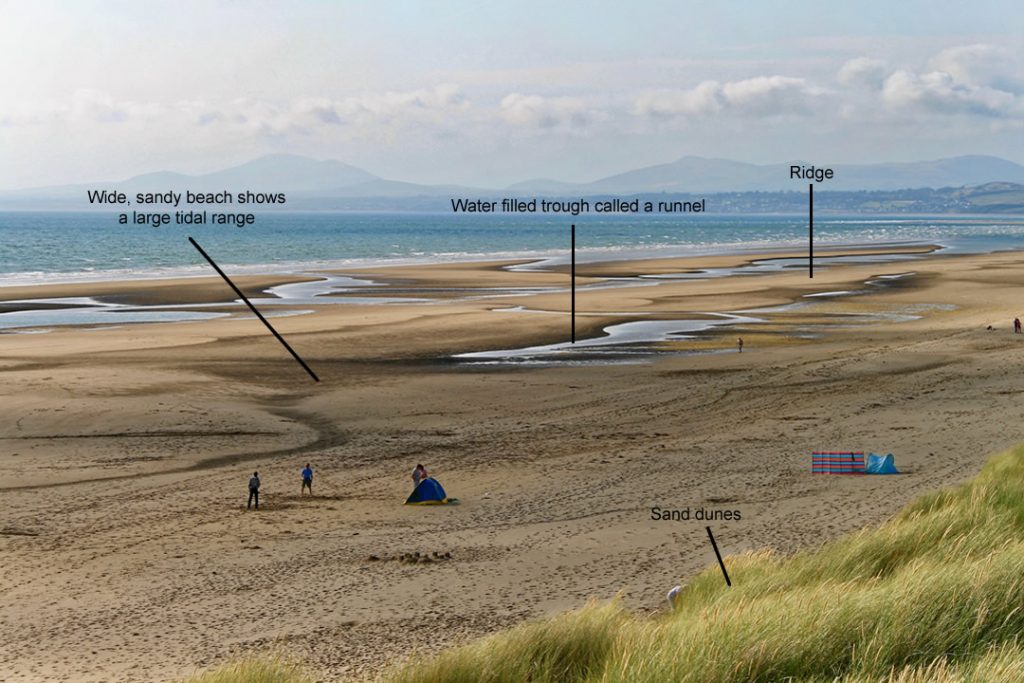 Ridge and runnels on Harlech beach

The images below show ridges and runnels along the beach at Harlech, North Wales. 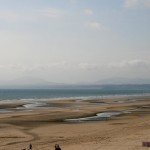 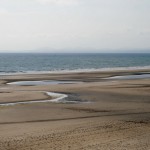 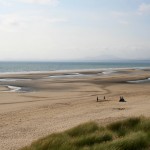 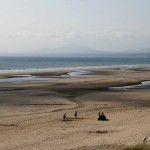 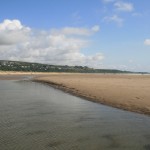 Spring tides often form a storm ridge which consists of the largest material thrown up by the strong swash of the larger waves. Following tides often cannot reach these features, therefore, they remain largely untouched. There are often a series of smaller ridges formed beneath the storm ridge known as berms. These mark the successive high tides that follow the spring tide through to the neap tide. The images below shows a berm on Hornsea beach. 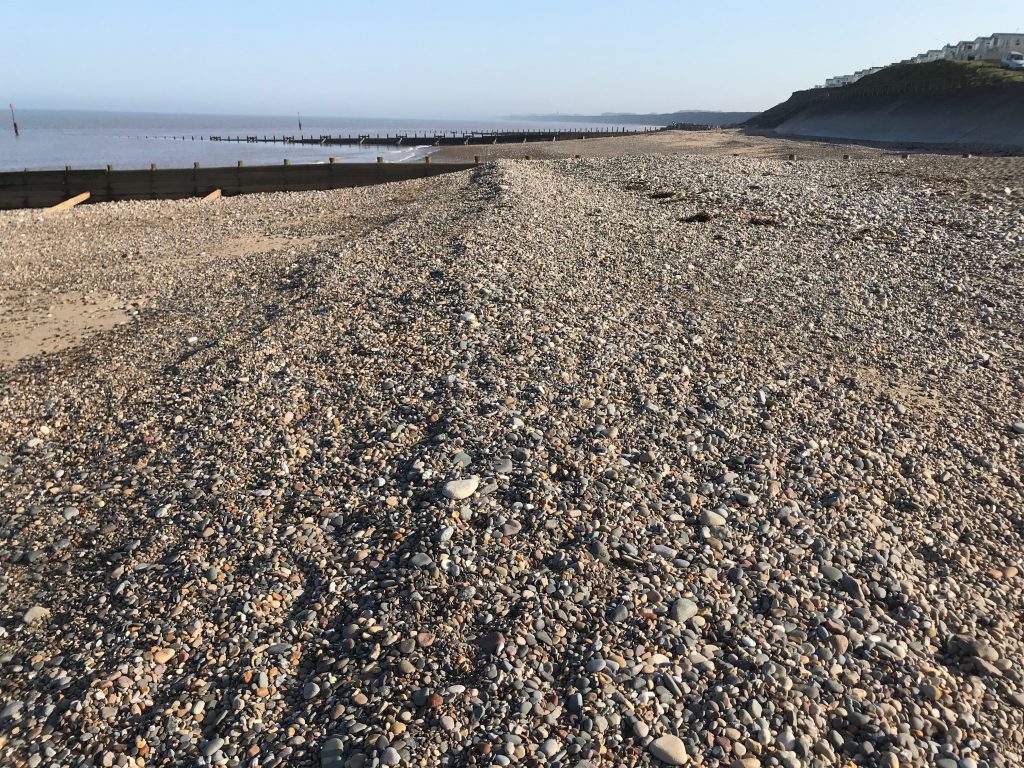 A berm at Hornsea beach

Cusps are crescent-shaped indentations that form on beaches of mixed sand and shingle. They are formed where there is a junction between sand and shingle. Once the curving shape is created, swash is concentrated in the small bay that forms in the centre of the cusp. This creates a stronger backwash that removes material down the beach.

Spits are formed where the coast suddenly changes direction e.g. across a river mouth. Longshore drift continues to deposit material across the mouth of a river which results in the formation of a long bank of sand and shingle. The image below shows Spurn Point which has been formed by the deposition of material transported by longshore drift from north to south along the Holderness Coast. Where the coast changes direction where it meets the mouth of the Humber Estuary this material continues to be deposited forming Spurn Point. A salt march has formed on the inside, sheltered side of Spurn Point (right of the picture). 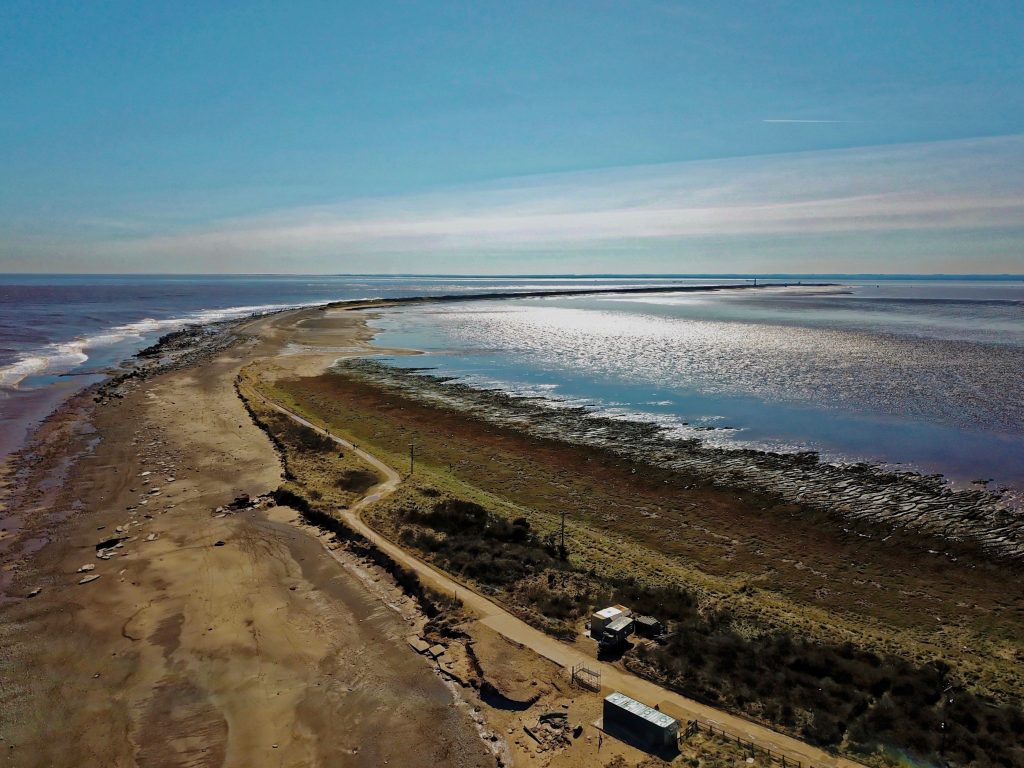 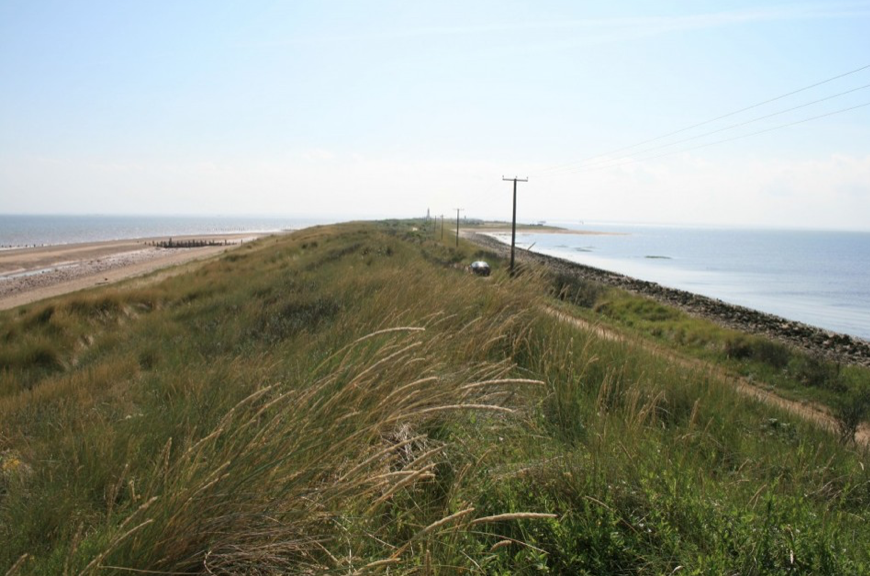 Changes in the prevailing wind and wave direction can cause a spit to form a recurved end. Over time several recurved ends may form as waves return to their dominant direction. Where the wind is strong enough to lift sediment of the beach dunes may form which adds stabilisation to the spit when pioneer plants such as marram grass anchor the sand.

A bar is a spit that joins together two headlands. Bars are particularly obvious at low tide when they become exposed. At high tide, bars make the water shallow which often causes waves to break early. A lagoon may be formed within a bay as the result of a bar. 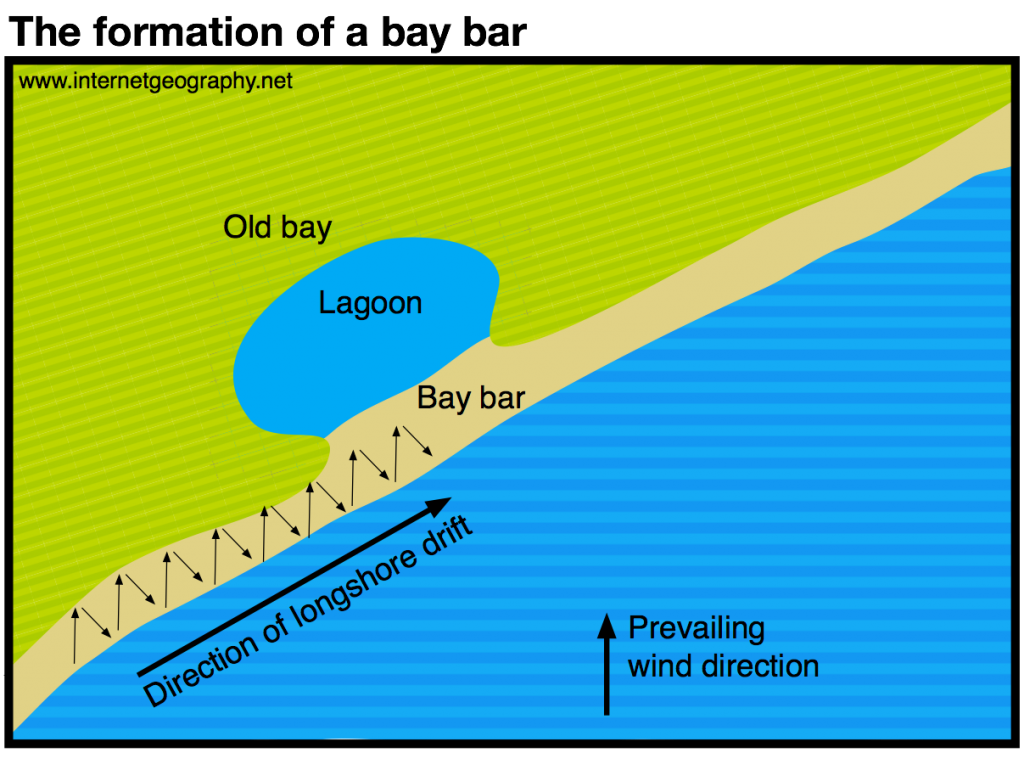 The formation of a bar

Where a spit links the mainland and an island a tombolo is formed.The image below shows a sandbar linking the Cies Islands, Spain. 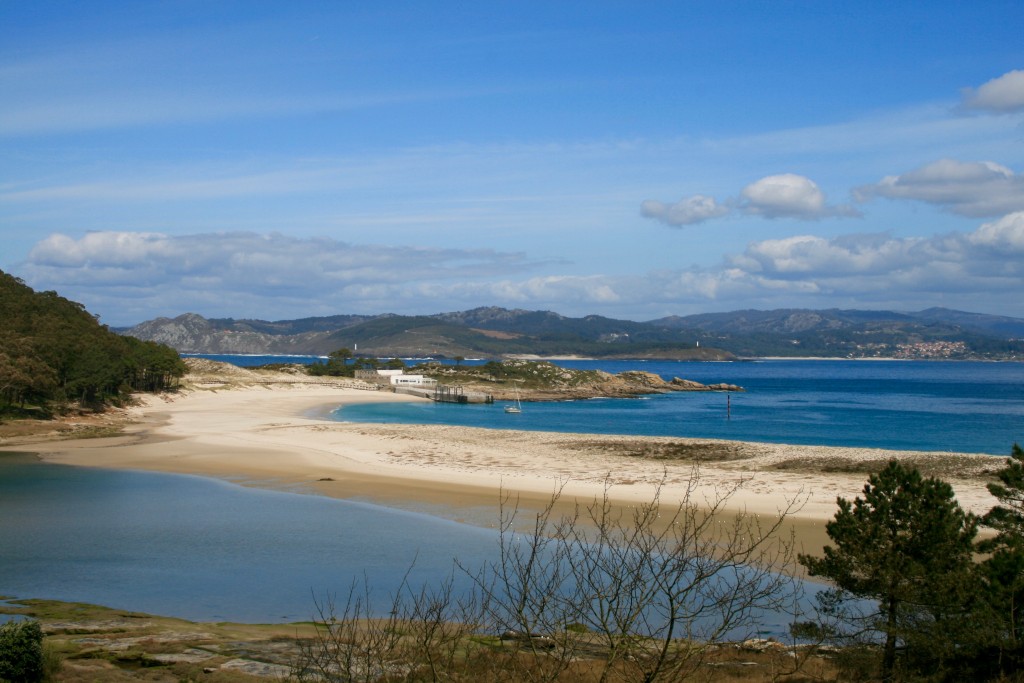 A sandbar linking the Cies Islands, Spain. Notice the lagoon behind the sandbar.

Dunes are landforms formed from sand deposits that have been blown off the beach. Where sufficient sand is deposited and dries in the intertidal zone (foreshore – the area between the high and low tide marks)  it is then transported by saltation by the blowing wind. Sand dunes only form where the rate of beach deposition is greater than erosion (positive sediment budget). 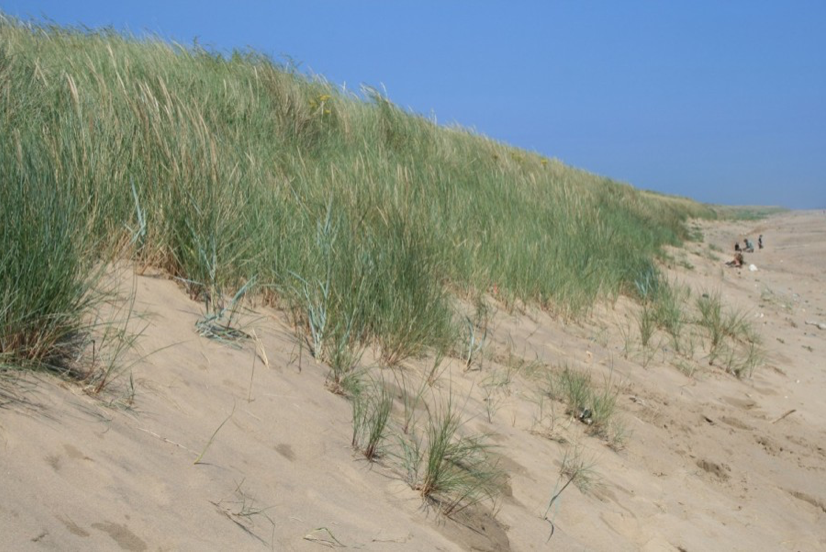 When the dried sand reaches the top of the beach it can be trapped by debris such as driftwood, dead seaweed or rocks and pebbles. If the sand is not eroded again it may become colonised by small plants, or trap other windblown debris, increasing its size and thus trapping even more sand. The PH of the sand is very alkaline here (carbonate from sea shells) and only the hardiest plants such as lyme grass and sand couch colonise. The first dunes to form are known as embryo dunes. They contain species such as lyme grass, sand couch and marram grass. These species survive by growing upwards through accumulating wind-blown sand. These plants add organic matter to the dunes making the dunes more hospitable for plants that later grow. These dunes tend to grow to around 1m. The next stage in the sequence of sand dune development is the formation of foredunes or yellow dunes. These are initially yellow but darken as organic material adds humus to the soil. The dunes remain slightly alkaline. Foredunes tend to grow to around 5m in height and around 20% of the sand is exposed (this is down from around 80% of embryo dunes). Very little moisture exists in this area. The next stage is the formation of grey dunes and dune ridges. By this stage, the dunes are more fixed. The soil becomes increasingly acidic as more humus forms which in turn increases water retention. Combined this allows new species of plants to thrive e.g. creeping willow and dewberry. Less than 10% of the sand is exposed on these dunes which tend to be between 8-10m high. As sand dunes become colonised with vegetation roots stabilise the sand and hold it together. The video below shows an area of sand dune at Spurn Point where erosion has caused the dune to begin to collapse. The erosion has exposed a cross-section of the dune revealing the depth of the roots. Very little sand from the beach accumulates beyond the grey dunes and dune ridges which leads to the formation of wasting dunes. Here the soil is more acidic, water retentive and rich in humus. The typical vegetation here includes heather and gorse. Dune height here is usually between 6-8m high.

Salt marshes often occur in sheltered river estuaries or behind spits. Vegetation develops in the intertidal mudflats found in these areas. An example of this is behind Spurn Point in the Humber Estuary. The image below shows the salt marsh in this area. 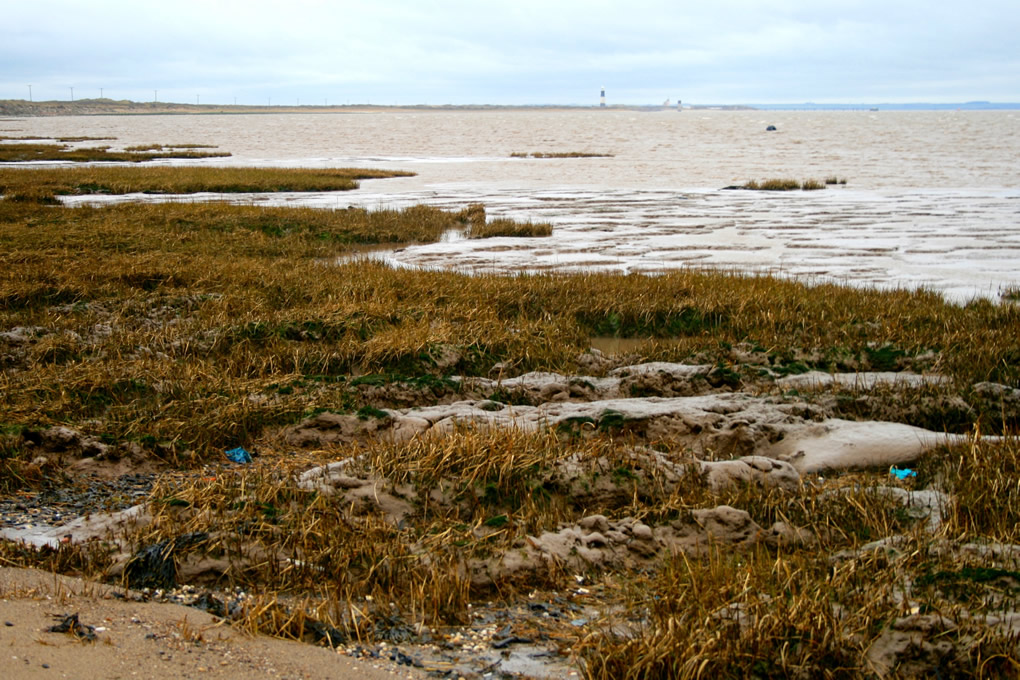 Find out about erosional landforms.

Find out about the causes and effects of sea level rise