Alfred Wegener, a German meteorologist born in 1880, developed the idea of continental drift. He suggested that continents moved around the earth like giant rafts. Fellow scientists at the time thought the theory was ludicrous. He is now considered the father of the theory of plate tectonics. Although part of his theory of continental drift, that the continents ploughed through the ocean floor, has now been discounted, there is certain evidence for the breakup and movement of continents over the surface of the Earth. 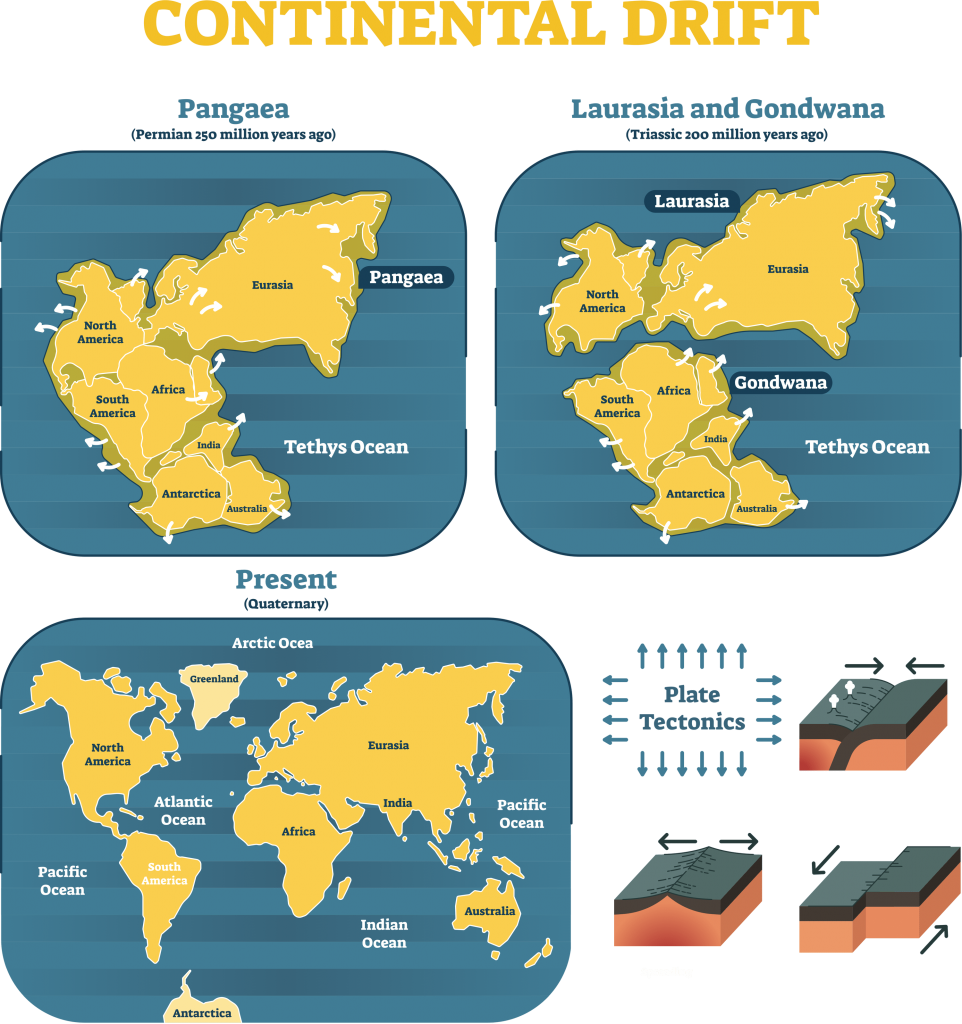 The early evidence of continental drift claimed by Wegener includes:

• the ‘fit’ of the coastlines of South America and Africa;

• evidence for a late-Carboniferous glaciation exists in deposits in India, South America and Antarctica. These deposits must have been formed together and subsequently moved;

• geology in northern Scotland closely match those found in eastern Canada, indicating that they were laid down in the same position;

• fossil brachiopods found in some Indian limestones are comparable with similar fossils found in Australia;

• fossil remains of mesosaurus, a prehistoric reptile, are found in both southern Africa and South America;

• the plant Glossopteris is a fern that has been found in Africa, Antarctica, Australia and South America.  It is used as evidence that these continents must have been joined together around 250 million years ago.

The video below might help you remember the evidence to support Wegener’s theory.

In the second half of the twentieth century, more evidence emerged that supported the theory of continental drift. This included:

• the discovery of mid-oceanic ridges discovered as the result of ocean floor mapping. A mid–ocean ridge or mid–oceanic ridge is an underwater mountain range, formed by plate tectonics. As plates move apart magma rises along the constructive plate margin forming new land along the boundary of the plates;

• palaeomagnetism – evidence of sea-floor spreading is gained from an examination of the polarity of the rocks that make up the ocean floor. Iron particles in lava are aligned with the Earth’s magnetic field. At regular intervals the polarity of the Earth reverses; this results in a series of magnetic stripes with the sea-floor rocks aligned alternately towards north and south poles. This striped pattern, which is mirrored exactly on either side of a mid-oceanic ridge, suggests that the ocean crust is slowly spreading away from the boundary. Also, the ocean crust gets older with distance from the mid-ocean ridge;

• the discovery of ocean trenches where large areas of the ocean floor are pulled downwards and destroyed.

The distribution of the continents today is very different to what they were millions of years ago. This is because the plates have moved as the result of convection currents in the mantle.