There are three main types of processes that occur in a river. These are erosion, transportation and deposition. All three depend on the amount of energy there is in a river.

The energy in a river causes erosion. The bed and banks can be eroded making it wider, deeper and longer.

Headward erosion makes a river longer. This erosion happens near its source. Surface run-off and throughflow cause erosion at the point where the water enters the valley head.

Lateral erosion makes a river wider. This occurs mostly in the middle and lower stages of a river.

There are four main processes of erosion that occur in rivers. These are:

The pressure of water breaks away rock particles from the river bed and banks. The force of the water hits river banks and then pushes water into cracks. Air becomes compressed, pressure increases and the riverbank may, in time collapse. Where velocity is high e.g. the outer bend of meaner, hydraulic action can remove material from the banks which may lead to undercutting and river bank collapse. Near waterfalls and rapids, the force may be strong enough to work on lines of weakness in joints and bedding planes until they are eroded.

The sediment carried by a river scours the bed and banks. Where depressions exist in the channel floor the river can cause pebbles to spin around and turn hollows into potholes.

Eroded rocks collide and break into smaller fragments. The edges of these rocks become smoother and more rounded. Attrition makes the particles of rock smaller. It does not erode the bed and bank. Pieces of river sediment become smaller and more rounded as they move downstream.

Carbon dioxide dissolves in the river to form a weak acid. This dissolves rock by chemical processes. This process is common where carbonate rocks such as limestone and chalk are evident in a channel.

Transportation of material in a river begins when friction is overcome. Material that has been loosened by erosion may be then transported along the river. There are four main processes of transportation. These are: 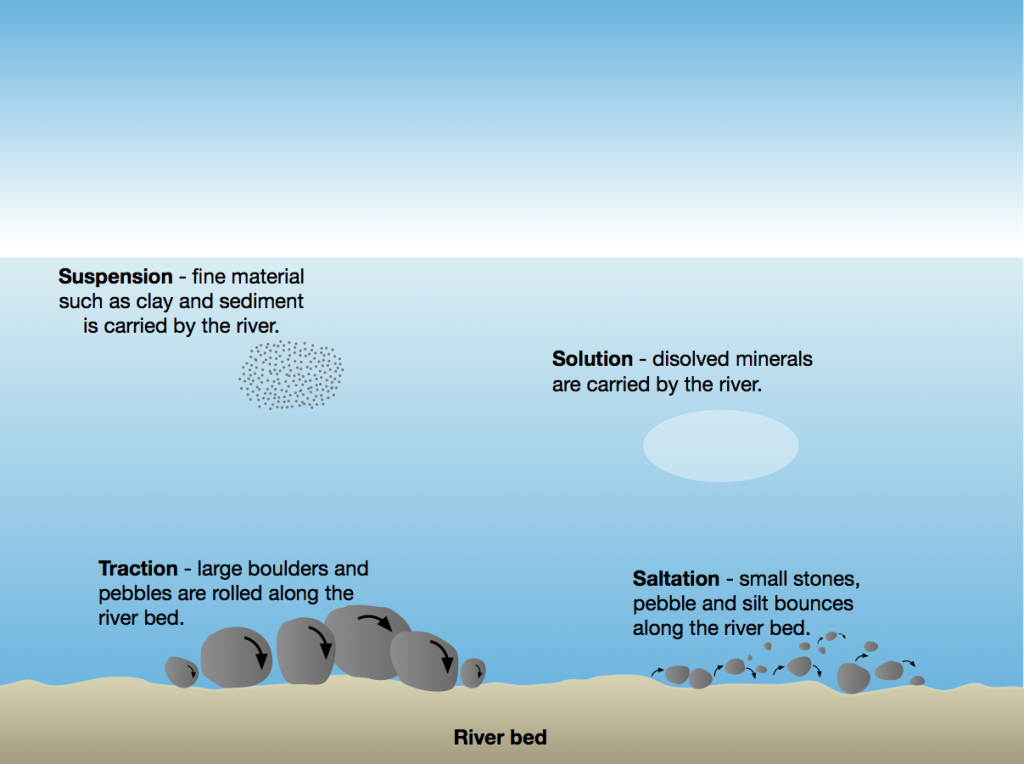 Processes of transportation in a river

Suspension is when material made up of very fine particles such as clay and silt is lifted as the result of turbulence and transported by the river. Faster-flowing, turbulent rivers carry more suspended material. This is why river appear muddy as they are approaching bankfull discharge and towards the mouth of the river (where velocity is greater as is the occurrence of finer sediment).

Solution is when dissolved material is carried by a river. This often happens in areas where the geology is limestone and is dissolved in slightly acidic water.

Saltation is when material such as pebbles and gravel that is too heavy to be carried in suspension is bounced along the river by the force of the water.

Traction is when large materials such as boulders are rolled and pushed along the river bed by the force of the river.

The video below shows transportation in a river in the form of traction, saltation and suspension.

The capacity of a river is the total load a river can transport at a given point.

Deposition is the process of the eroded material being dropped. This happens when a river loses energy. A river can lose its energy when rainfall reduces, evaporation increases, friction close to river banks and shallow areas which leads to the speed of the river reducing and therefore the energy reduces, when a river has to slow down it reduces its speed (and ability to transport material) and when a river meets the sea.

When discussing transportation you need to know the difference between the competence and capacity of a river. The competence is the maximum size of load a river is able to carry whereas capacity is the total volume of material a river can transport. The competence of a river is the maximum particle size that a river can transport at a particular point. The Hjulström curve shows the relationship between river velocity and competence. It shows the velocities at which sediment will normally be eroded, transported or deposited. The critical erosion velocity curve shows the minimum velocity needed to for the river to erode (pick up) and transport material of different sizes (e.g. as bedload or in suspension). A greater velocity is required to erode material compared to just transporting it. The mean settling velocity curve shows the velocities at which different sized particles are deposited.