Hard engineering techniques are typically used to protect coastal settlements. They are used to deflect the power of waves. These are highly visible solutions which help reassure coastal communities. However, they are are expensive to install and maintain. In addition to this by installing hard engineering solutions in one place this can have a detrimental effect further along the coast.

Sea walls aim to protect the coast by by shielding it with concrete, steel and stone. Some sea walls are recurved, like the one shown in the video of Scarborough sea defences below. The aim of the lip is to deflect the energy of the wave. They are effective in protecting cliffs from erosion and also act as a barrier to prevent flooding. The disadvantages of sea walls are that they are expensive to construct and maintain. They also create a strong backwash which can erode under the wall.

Revetments are slanted structures build along cliffs. They can be made from concrete, wood or rocks. Cliff erosion is prevented as waves break against them with the revetment absorbing the energy. This are expensive to build but cheap to maintain. Like seawalls they also create a strong backwash. The video below shows a revetment at Hornsea, Holderness Coast.

The image below shows the revetment during a spring tide. 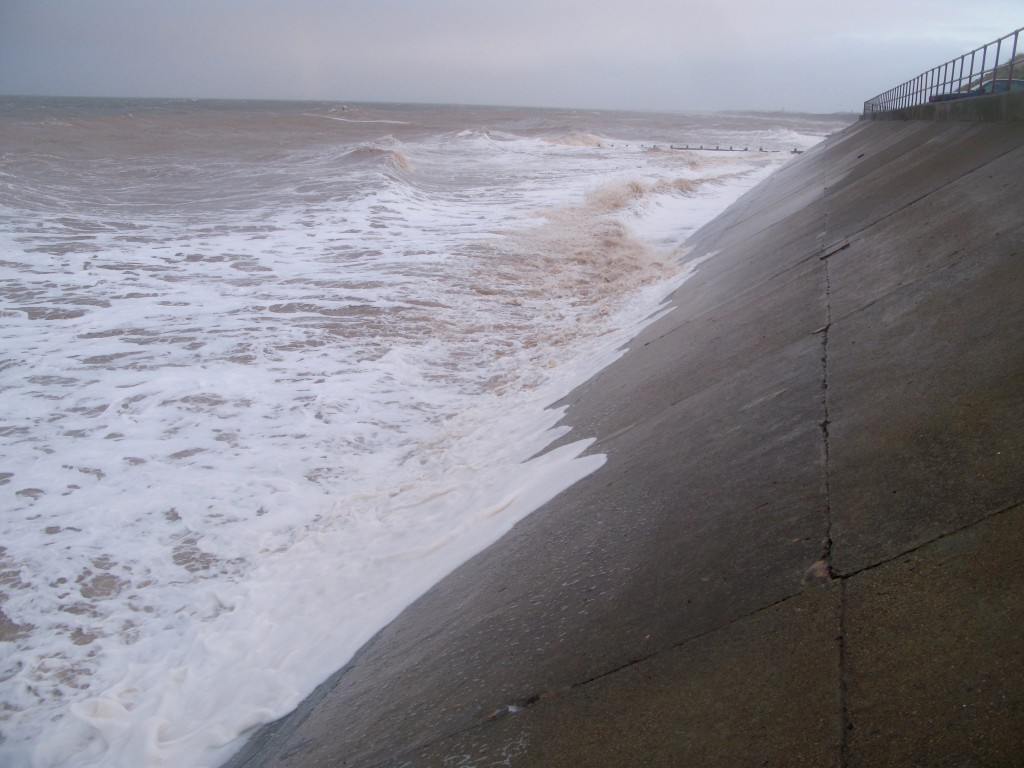 These structure are sometimes constructed in bays and estuaries. Coastal barrages are partly submerged structures containing sluice gates that control the tidal flow of the sea and river water from land. They help provide a more consistent level of water. An example can be found in Cardiff Bay, Wales. Coastal barrages can also be used to generate hydro-electricity.  Their environmental impacts are considerable due to their impact on tides and are very expensive to construct and maintain.

Rock armour or rip-rap involves placing large boulders in front of a cliff or sea wall to absorb the energy of waves. Rock armour is a cheaper solution than seawalls to deflect the wave energy. The video below shows a combination of rock armour in the form of large rocks and accropodes (x shaped concrete structures) at Scarborough, North Yorkshire.

Gabions work in a similar way to rock armour. They consist of metal cages containing rock. Gabions are usually constructed at the base of a cliff to absorb wave energy and reduce erosion. Gabions are relatively cheap to construct though they are not very attractive. The video below shows a basic gabion constructed from old railway lines and rock boulders.

Groynes are fence-like structure constructed at right angles to the coast. They trap material transported by longshore drift. This helps preserve a wide, sandy beach which provides a buffer between the sea and cliffs. The preserved beach helps slow waves and reduce their energy which provides protection from flooding and erosion.

A groyne at Hornsea, Holderness Coast.

Traditionally, groynes have been constructed from wood but stone groynes are increasingly becoming popular. The video below shows the stone groyne constructed at Mappleton, Holderness Coast.  One of the main problems with groynes is that although they provide protection in the locality where they are installed they can lead to an increase in erosion further down the coast. Material continues to be transported away by longshore drift beyond the defences however no material is able to replace it (as it is trapped behind a groyne). This means that eventually the beaches beyond the protected area are transported away leaving little or no protection from even neap tides. This is particularly evident at Mappleton, Holderness Coast. The video below shows this.

Cliff fixing involves driving metal bars into the cliff to stabilise it.  sometimes metal mess if added to stop loose rock from falling.

Old tyres and cement can be used to create off-shore reefs to encourage waves to break offshore. This reduces the impact of waves on the base of a cliff. Share

Find out about the causes and effects of coastal flooding.

Find out about soft engineering along the coast.