Rivers are the main source of sediment input into the coastal sediment budget. This is especially the case for coasts with a steep gradient, where rivers directly deposit their sediments at the coast. Coasts with a low gradient may lose river sediment to estuaries. Sediment delivery to the shoreline can be intermittent, mostly occurring during floods. In some locations, as much as 90 percent of coastal sediment comes from rivers.

The origin of the sediment is the erosion of inland areas by ice, wind and water as well as sub-aerial processes such as mass movement and weathering.

Wave erosion is also the source of large amounts of sediment and makes a significant contribution to coastal sediment budgets. Cliff erosion can be increased by rising sea levels and is amplified by storm surge events. The erosion of weak cliffs in high-energy wave environments contributes as much as 70 percent of the overall material supplied to beaches, although typically it contributes much smaller amounts. Some of this sediment may comprise of large rocks and boulders, especially if it is from the collapse of undercut cliffs.

Longshore drift can also supply sediment to one coastal area by moving it along the coast to adjacent areas.

Constructive waves bring sediment to the shore from offshore locations and deposit it, adding to the sediment budget. Tides and currents do the same. Wind also blows sediment from other locations, including exposed sandbars, dunes and beaches elsewhere along the coast. This aeolian material is typically fine sand, as wind has less energy than water and so cannot transport very large particles.

The main way humans can affect the coastal sedimentary budget is through beach nourishment. When a coastal sediment budget is in deficit, beach nourishment is one-way sediment equilibrium can be maintained. This type of management has been adopted all over the world in order to preserve and protect the coastal environment. Sediment can be brought in by lorry and dumped on the beach before being spread out by bulldozers. Alternatively, sand and water can be pumped onshore by pipeline from offshore sources.

In addition to this hard engineering, coastal management solutions can also affect the coastal budget. For example, input from longshore drift can be affected by building groynes. 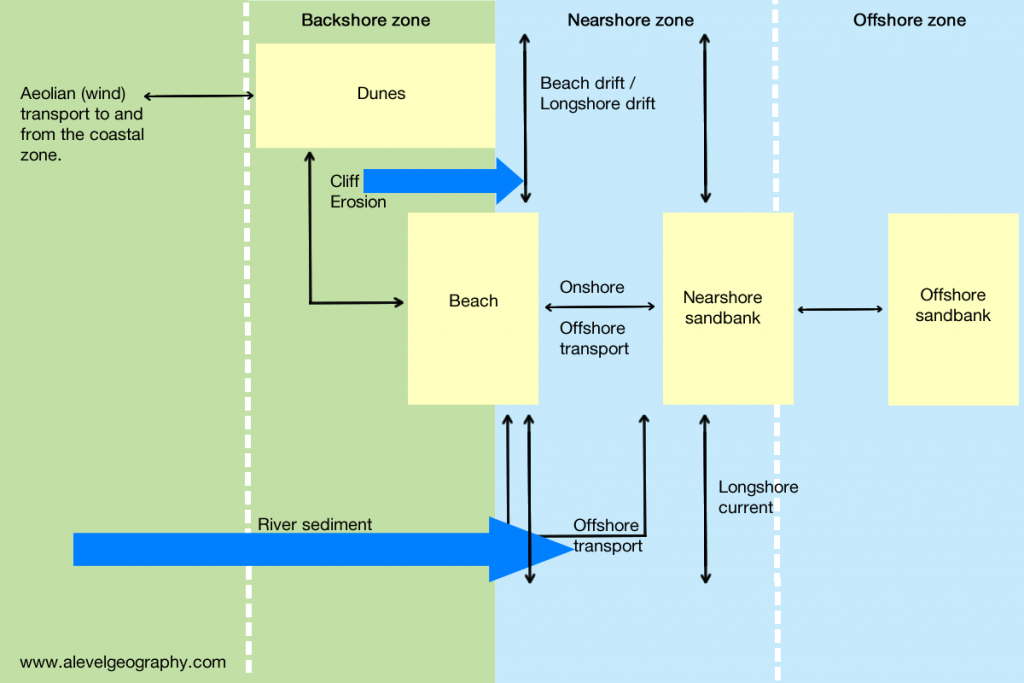 Find out about sediment cells and closed systems.

Find out about the process of longshore drift.