Why does the carbon cycle experience change?

Throughout Earth’s history, there have been natural changes in the carbon cycle. Carbon undertakes considerable levels of change over time. Although carbon can be stored in the Earth for millions of years it can be transferred in seconds from one store to another. The carbon within the carbon cycle undergoes changes and at all scales and in all time frames.

Physical causes of changes in the carbon cycle

Over the past 2.6 million years global climates have fluctuated between interglacial (warm) and glacial (cold) periods. Data from ice cores from the Antarctic ice sheet show temperature and carbon dioxide levels mirror each. Higher temperatures are associated with high concentrations of carbon dioxide in the atmosphere. 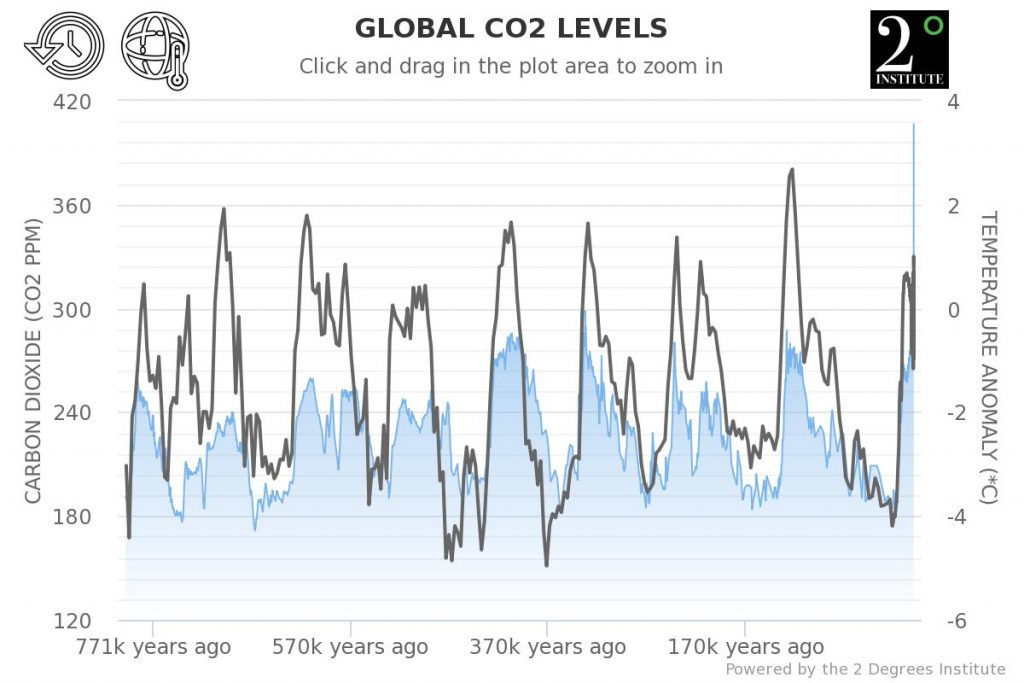 Temperature and carbon dioxide levels over the last 800000 years

It is interesting to note the scale of the recent increase in CO2 levels to over 400ppm (parts per million by volume).

The impacts of cold conditions on carbon stores and transfers

Carbon transfers to soil are reduced during cold conditions due to the reduced effectiveness of decomposers.

Less sediment is transported by rivers and deposited in seas and oceans as more water is stored as snow and ice.

When soil is frozen, the transfer of carbon is stopped.

The impacts of warm conditions on carbon stores and transfers

During warm conditions carbon, along with other gases such as methane, stored in permafrost (permanently frozen land) is released. This enhances the greenhouse effect and increases warming. This is an example of positive feedback, that further destabilises the system.

Warmer temperatures increase the rate of decomposition which increases the rate of carbon transfer to the soil by decomposers.

As temperatures increase, so too does the risk of wildfires. During 2019 a large area of tundra, covering Siberia, Alaska, Canada and Greenland experienced wildfires, contributing a significant amount of greenhouse gases into the atmosphere. According to World Meteorological Organisation Arctic wildfires, some the size of 100,000 football pitches, emitted as much carbon dioxide (CO2) last month as the country of Sweden does in a whole year.

Carbon, trapped in rocks for millions of years, is returned to the atmosphere through volcanic eruptions. Between 542 and 251 million years ago, during the Palaeozoic era, volcanoes were much more active than they are today. Huge volumes of carbon dioxide were released into the atmosphere during this time. Today, between 130 and 380 million tonnes of carbon dioxide is released annually. This compares to 30 billion tonnes released by human activities such as burning fossil fuels.