Water does not come into or leave planet earth. Water is continuously transferred between the atmosphere and the oceans. This is known as the global hydrological cycle. This system is a closed system. There are no inputs or outputs.

The drainage basin hydrological system is a local open system. A drainage basin is an area of land drained by a river and its tributaries (river system). It includes water found in the water table and surface run-off. There is an imaginary line separating drainage basins called a watershed. Usually, this is a ridge of high land. The red line in Figure 1 shows the watershed for a river basin. Any precipitation that falls on the other side of the watershed will flow into a river in the adjacent river basin. 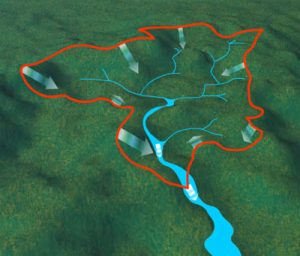 Figure 1. A drainage basin and its watershed.

This open system has a range of inputs, outputs, stores, transfers and flows. 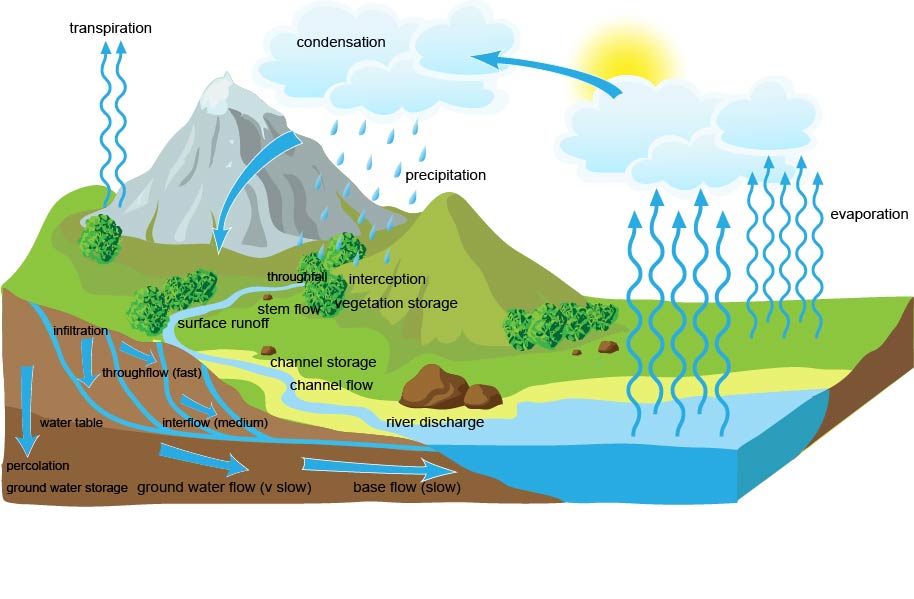 Inputs include precipitation (including rain and snow) and solar energy for evaporation.

Outputs move moisture out of the drainage basin and include evaporation and transpiration from vegetation (together known as evapotranspiration), run-off into the sea and percolation of water to underlying rock strata into underground stores.

Inputs – water coming into the system

Precipitation – all forms of moisture that reach the Earth’s surface e.g. rain, snow, sleet and hail.

Storage – water stored in the system

Interception – this is when precipitation lands on buildings, vegetation and concrete before it reaches the soil. Interception storage is only temporary as it is often quickly evaporated.

Vegetation storage – this is water taken up by vegetation. It is all the moisture in vegetation at any one time.

Surface storage – the total volume of water held on the Earth’s surface in lakes, ponds and puddles.

Channel storage -the water held in a river or stream channel.

Flows and Processes – water moving from one place to another

Baseflow – water that reaches the channel largely through slow throughflow and from permeable rock below the water table.

Channel flow –  the movement of water within the river channel. This is also called a river’s discharge.

Groundwater flow –  the deeper movement of water through underlying permeable rock strata below the water table. Limestone is highly permeable with lots of joints and can lead to faster groundwater flow.

Infiltration – the downward movement of water into the soil surface.

Percolation – the gravity flow of water within the soil.

Stemflow – water running down a plant stem or tree trunk.

Surface Runoff – the movement of water over the surface of the land, usually when the ground is saturated or frozen or when precipitation is too intense from infiltration to occur.

Throughflow- the movement of water downslope within the soil layer. Throughflow is fast through pipes (cracks int he soil or animal burrows).

Evaporation – the transformation of water droplets into water vapour by heating.

Evapotranspiration – the loss of water from a drainage basin into the atmosphere from the leaves of plants + loss from evaporation.

River discharge – the amount of water that passes a given point, in a given amount of time.

Check what you know with the drainage basin hydrological cycle quiz.