Sub-aerial process are land-based processes which alter the shape of the coastline. These are a combination of weathering and mass movement.

Weathering is the decay and disintegration of rock in situ.  There are two main types of weathering that affect the coast. These are mechanical and biological weathering.

Mechanical or physical weathering is the fracture and breakdown of rocks into fragments.  Along the coast, it may be caused by frost shattering (freeze-thaw), salt crystallisation, wetting and drying, or even biologically.

Mechanical weathering refers to physical processes such as freeze-thaw and biological weathering. Freeze-thaw occurs when water gets into cracks in rocks and freezes. This then expands by around 10%. The repeated freeze-thaw action puts pressure on the rocks until they eventually crack and break the rock. Freeze-thaw usually occurs when the temperature oscillates around freezing point. The shattered angular fragments of rock accumulate around the base of the cliff as scree (talus). As coastal climates tend to be milder this process is only really effective during very cold winters. 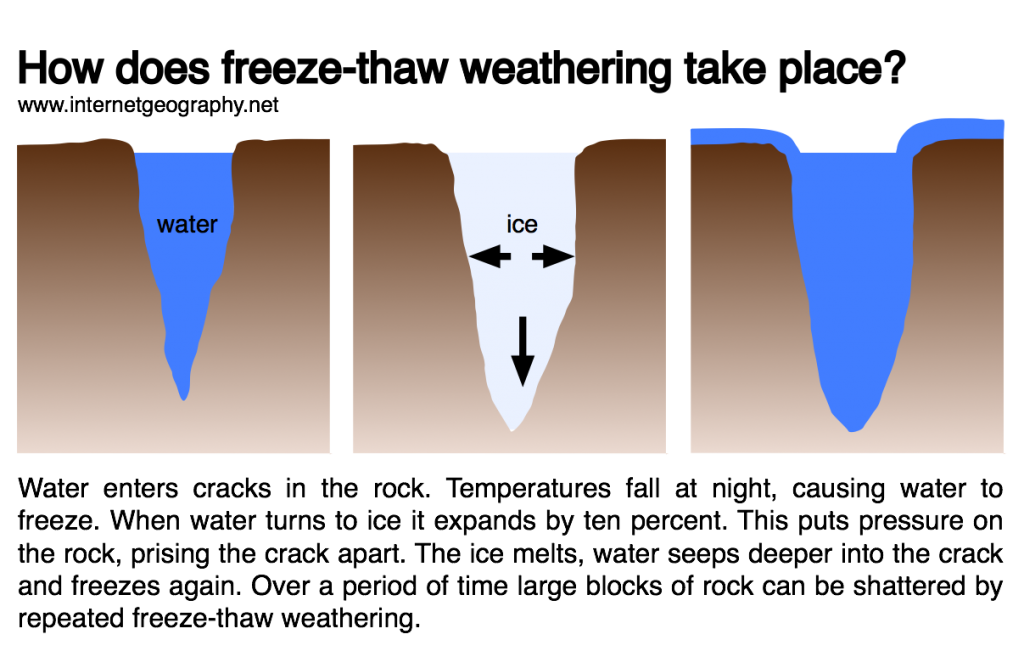 A common type of mechanical weathering found at coasts is salt crystallisation. This is when salt crystals are deposited in cracks and over time the salt accumulates and applies pressure to the crack (similar to freeze-thaw weathering).

Wetting and drying is common along coastlines. Clay-rich rocks are prone to expand when they are wet and contract when they dry. This results in cracks which are vulnerable to both freeze-thaw and salt crystallisation.

Biological weathering is mechanical when there is a physical effect. An example of this is when growing plant roots widen cracks as does the leverage created by bushes and trees swaying in strong winds. Burrowing animals and nesting birds excavate material in partially weathered and eroded cliffs.

Chemical weathering involves decomposition of rocks (literally, changing the minerals). Chemical weathering occurs as a result of a weak chemical reaction between water and rock. eg. with limestone. Rainwater mixed with carbon dioxide in the atmosphere forms Carbonic acid. This then reacts with calcium carbonate in limestone to form calcium bicarbonate. Bicarbonate is soluble in water and the limestone gets weathered when carbonation occurs.

The role of weathering is to weaken cliffs. This weakening speeds up the rates of erosion.

Soil creep is a slow but continuous process. It typically occurs on most slopes over 5 degrees. Soil creep rarely exceeds speeds of 1cm per year. Creep occurs as the result of repeated expansion and contraction of material. Cycles of freeze-thaw heave particles upon freezing and allow them to fall further downslope when the ice melts. Alternating hydration and dehydration have the same effect.

Earth flows tend to be faster than slow creep but less sporadic. Earthflows have a characteristic “hourglass” shape. The slope material liquefies and runs out, forming a bowl or depression at the head. The flow itself is elongate and usually occurs in fine-grained materials or clay-bearing rocks on moderate slopes and under saturated conditions. However, dry flows of granular material are also possible.

This is the downslope movement of a large block of material that moves as a coherent mass. This means it retains its internal structure until hitting the base of the slope and fracturing into smaller pieces. It is more common over wet periods, on steep slopes and often occurs on coastlines. 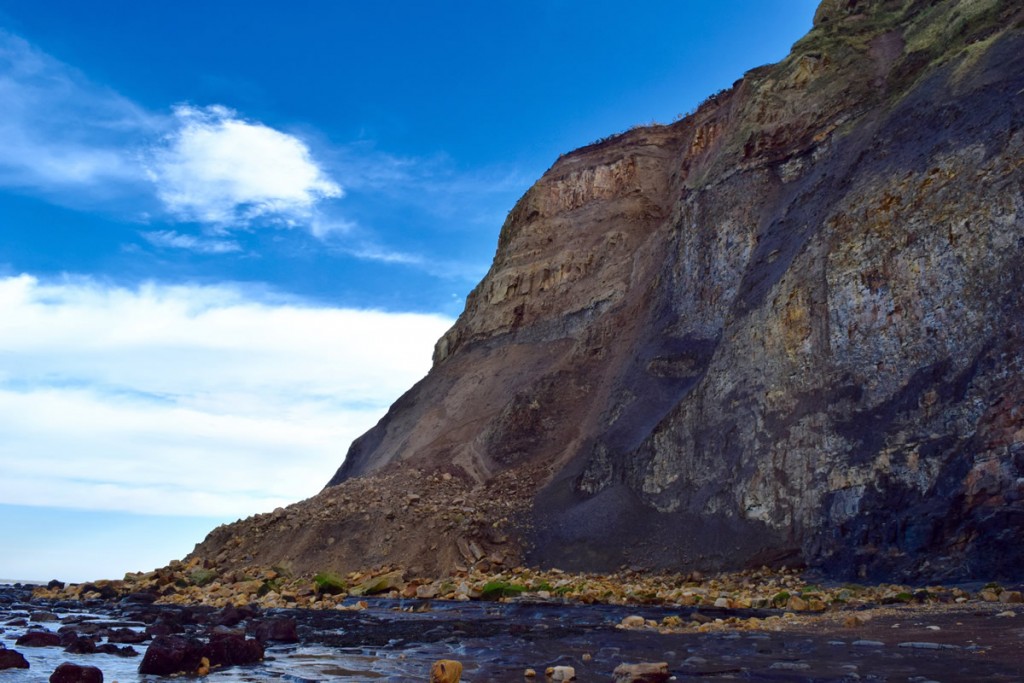 A landslide at Port Mulgrave, Yorkshire and Cleveland Heritage Coast.

A mudflow is an earthflow consisting of material that is wet enough to flow rapidly and that contains at least 50 percent sand, silt, and clay-sized particles. In some instances, for example in many newspaper reports, mudflows and debris flows are commonly referred to as “mudslides.”

The video below shows a small mudflow at Hornsea, Holderness Coast.

One of the most common types of mass movement along the coast are rotational slumps. The video below shows slumping at Mappleton, Holderness Coast.

Slumps happen because of a number of factors. Firstly, marine processes erode and undermine the base of the cliff. Rainwater infiltrates the cliff through unconsolidated, porous material (e.g. boulder clay). This then creates a slip plane. The weight of the saturated clay causes the material to slump along the slip plane.  The process is illustrated in the diagram below.

The video below shows slumping in the background and an earthflow in the foreground at Mappleton, Holderness Coast.

Rockfalls are usually associated with nearly vertical slopes. Only more resistant rock can sustain these angles on the coast.  They are most commonly triggered by undercutting in the inter-tidal zone or freeze-thaw weathering.

Find out about types of waves and how they are formed.

Find out about erosion, deposition and transportation.