Case Study: How does Japan live with earthquakes?

Japan lies within one of the most tectonically active zones in the world. It experiences over 400 earthquakes every day. The majority of these are not felt by humans and are only detected by instruments. Japan has been hit by a number of high-intensity earthquakes in the past. Since 2000 there are have been 16000 fatalities as the result of tectonic activity.

Japan is located on the Pacific Ring of Fire, where the North American, Pacific, Eurasian and Philippine plates come together. Northern Japan is on top of the western tip of the North American plate. Southern Japan sits mostly above the Eurasian plate. This leads to the formation of volcanoes such as Mount Unzen and Mount Fuji. Movements along these plate boundaries also present the risk of tsunamis to the island nation. The Pacific Coastal zone, on the east coast of Japan, is particularly vulnerable as it is very densely populated.

Japan experienced one of its largest seismic events on March 11 2011. A magnitude 9.0 earthquake occurred 70km off the coast of the northern island of Honshu where the Pacific and North American plate meet. It is the largest recorded earthquake to hit Japan and is in the top five in the world since records began in 1900. The earthquake lasted for six minutes. 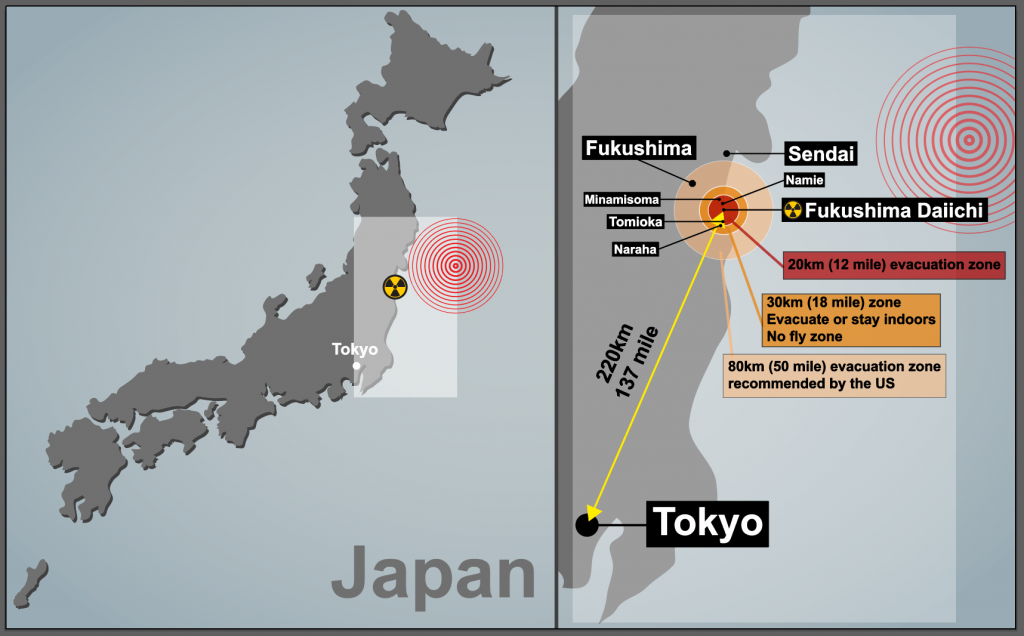 A map to show the location of the 2011 Japan Earthquake

The earthquake had a significant impact on the area. The force of the megathrust earthquake caused the island of Honshu to move east 2.4m. Parts of the Japanese coastline dr[[ed by 60cm. The seabed close to the focus of the earthquake rose by 7m and moved westwards between 40-50m. In addition to this, the earthquake shifted the Earth 10-15cm on its axis.

The earthquake triggered a tsunami which reached heights of 40m when it reached the coast. The tsunami wave reached 10km inland in some places.

What were the social impacts of the Japanese earthquake in 2011?

The tsunami in 2011 claimed the lives of 15,853 people and injured 6023. The majority of the victims were over the age of 60 (66%). 90% of the deaths was caused by drowning. The remaining 10% died as the result of being crushed in buildings or being burnt. 3282 people were reported missing, presumed dead.

Disposing of dead bodies proved to be very challenging because of the destruction to crematoriums, morgues and the power infrastructure. As the result of this many bodies were buried in mass graves to reduce the risk of disease spreading.

Many people were displaced as the result of the tsunami. According to Save the Children 100,000 children were separated from their families. The main reason for this was that children were at school when the earthquake struck. In one elementary school, 74 of 108 students and 10 out of 13 staff lost their lives.

More than 333000 people had to live in temporary accommodation. National Police Agency of Japan figures shows almost 300,000 buildings were destroyed and a further one million damaged, either by the quake, tsunami or resulting fires. Almost 4,000 roads, 78 bridges and 29 railways were also affected. Reconstruction is still taking place today. Some communities have had to be relocated from their original settlements.

What were the economic impacts of the Japanese earthquake in 2011?

The estimated cost of the earthquake, including reconstruction, is £181 billion. Japanese authorities estimate 25 million tonnes of debris were generated in the three worst-affected prefectures (counties). This is significantly more than the amount of debris created during the 2010 Haiti earthquake. 47,700 buildings were destroyed and 143,300 were damaged. 230,000 vehicles were destroyed or damaged. Four ports were destroyed and a further 11 were affected in the northeast of Japan.

There was a significant impact on power supplies in Japan. 4.4 million households and businesses lost electricity. 11 nuclear reactors were shut down when the earthquake occurred. The Fukushima Daiichi nuclear power plant was decommissioned because all six of its reactors were severely damaged. Seawater disabled the plant’s cooling systems which caused the reactor cores to meltdown, leading to the release of radioactivity. Radioactive material continues to be released by the plant and vegetation and soil within the 30km evacuation zone is contaminated. Power cuts continued for several weeks after the earthquake and tsunami. Often, these lasted between 3-4 hours at a time. The earthquake also had a negative impact on the oil industry as two refineries were set on fire during the earthquake.

Transport was also negatively affected by the earthquake. Twenty-three train stations were swept away and others experienced damage. Many road bridges were damaged or destroyed.

Agriculture was affected as salt water contaminated soil and made it impossible to grow crops.

The stock market crashed and had a negative impact on companies such as Sony and Toyota as the cost of the earthquake was realised.  Production was reduced due to power cuts and assembly of goods, such as cars overseas, were affected by the disruption in the supply of parts from Japan.

What were the political impacts of the Japanese earthquake in 2011?

Government debt was increased when it injects billions of yen into the economy. This was at a time when the government were attempting to reduce the national debt.

Several years before the disaster warnings had been made about the poor defences that existed at nuclear power plants in the event of a tsunami. A number of executives at the Fukushima power plant resigned in the aftermath of the disaster. A movement against nuclear power, which Japan heavily relies on, developed following the tsunami.

The disaster at Fukushima added political weight in European countries were anti-nuclear bodies used the event to reinforce their arguments against nuclear power.