Storm Desmond was an extratropical cyclone and the fourth named storm of the 2015–16 UK and Ireland windstorm season. Desmond directed a plume of moist air, known as an atmospheric river, which brought record amounts of rainfall to upland areas of the UK and subsequent major floods.

Thousands of homes were left flooded or left without power after Storm Desmond wreaked havoc in parts of the UK on the 5th and 6th of December 2015. In Lancashire and Cumbria, more than 43,000 homes across the north of England were left without power, as well as over 2,000 homes in the Republic of Ireland and around 700 in Wales, while an estimated 5,200 homes were affected by flooding.

The storm claimed two lives – in Cumbria and the Republic of Ireland.

Towns on the Scottish border, Carlise, Lancaster, Keswick, Braithwaite and Appleby amongst many others. Large areas have been indirectly affected due to an electricity substation becoming flooded which has left many communities without power. 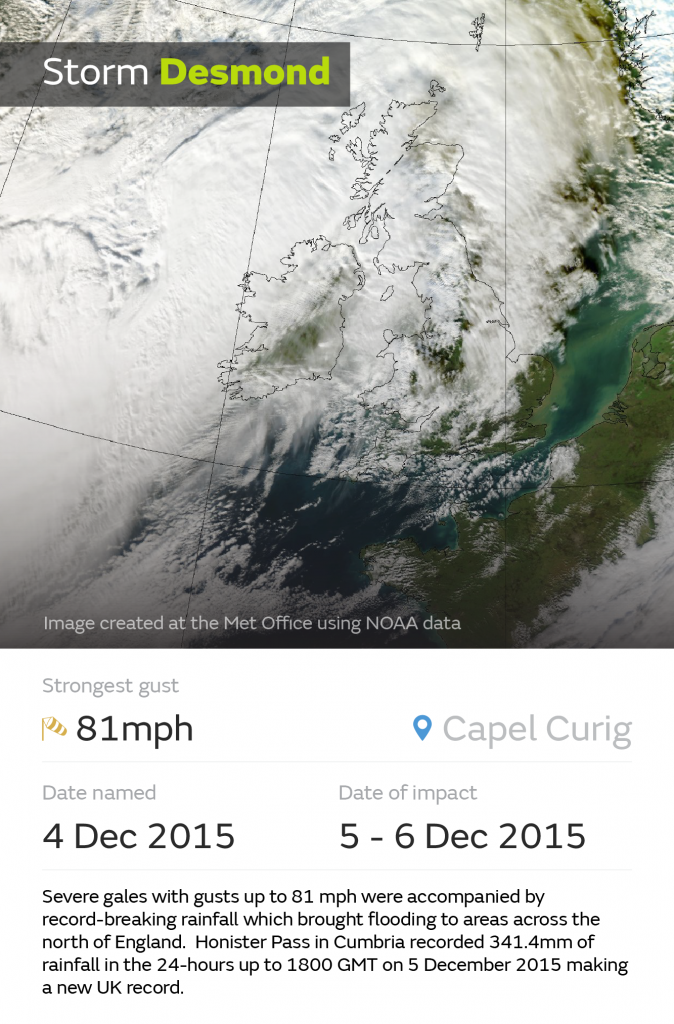 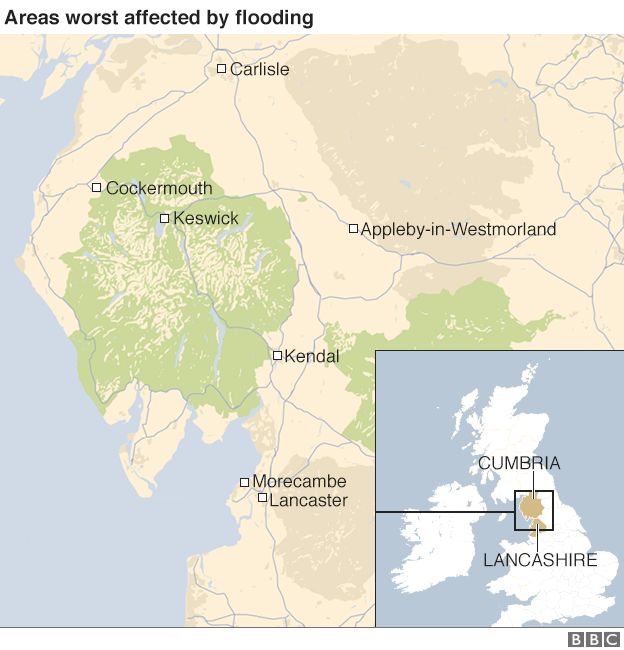 Desmond created an atmospheric river in its wake, bringing in moist air from the Caribbean to the British Isles. As a result, rainfall from Desmond was unusually heavy. The heavy rain and strong winds were caused by an area of low pressure which arrived on Friday from the Atlantic.

As reported in The Guardian, Storm Desmond flooding is partly due to climate change.

Storm Desmond caused an estimated £500m of damage across Cumbria – almost double the cost of the floods that hit parts of the county six years ago.

Environment Agency officials said the Cumbria flood defences did work, but no matter how substantial any defences are, “you can always get water levels higher than that, in which case it will go over the top”.

The Met Office said Storm Desmond had more impact because the “exceptional” levels of rain fell on already saturated land.

More than 1,000 people evacuated across Cumbria.

50,000 people were without power across Cumbria and Lancashire.

1,000 people have been evacuated from the Scottish border town of Hawick.

Road closures and closure of the West Coast Mainline rail route to Scotland and the Cumbrian coast rail line between Carlisle and Workington;

About 40 schools in Cumbria were closed and appointments and routine business across NHS hospitals were cancelled;

A train en route to Glasgow has been left stranded at Carlisle station overnight, with passengers having to sleep onboard.

The UK economy could be dented by as much as £3bn by damage from Storms Eva, Desmond and Frank.

A waterfall appeared at Malham Cove for a short time due to heavy rainfall. This had not previously happened in living memory.

According to Great Outdoors Magazine, the full extent of the environmental impact of Storm Desmond is yet to be assessed, but it is likely that footpaths and walls have been washed away, ground severely eroded, vegetation destroyed and water quality affected. Large amounts of the fragile upland soils have been washed into the swollen streams, rivers and lakes and will have an impact on water quality and aquatic wildlife.

Millions of tons of sediment was transported by the river and deposited on floodplains and in settlements in the areas affected.

Thousands of trees which once lined rivers in the area affected were ripped from river banks.

Landslides occurred in many places as the result of heavy rainfall and the land becoming saturated.

The Government mobilised a full national emergency response”. This included 200 military personnel and supporting assets (including a Chinook helicopter); 50 high-volume pumps; and the Environment Agency moving people, temporary defences and pumps to the north-west.

Several teams of Royal Engineers were deployed to help in the emergency response and recovery after the floods in Cumbria and Lancashire. Reconnaissance teams from 21 and 32 Regiment of 170 Engineer Group at Chilwell conducted technical assessments on at-risk and damaged bridges. More engineers were on standby.

Around 90 troops from 2nd Battalion Duke of Lancaster’s Regiment provided assistance and took supplies to remote areas such as Patterdale and Glenridding. Around 350 personnel were available to rotate as required.

£400,000 was donated within 48 hours by the public  after a £1m appeal was launched to help people affected by flooding caused by Storm Desmond.

Following the floods the Government announced a £50m repair and renew scheme for Cumbria and Lancashire after the floods, promising businesses and homeowners they will quickly receive the help they need. The scheme was administered by local authorities.

The government’s Cobra committee announced the 5,000 households and businesses affected would be given council tax and business rate relief.

The government launched the Bellwin scheme to fully reimburse councils for the costs of dealing with flooding, and ministers reviewed all flood defence plans.

Meanwhile, the Prince’s Countryside Fund announced it is releasing £40,000 from its Emergency Fund, to help rural communities, farmers and businesses in the north of England and Scotland recover from flood damage.

A National Flood Resilience Review is taking place to better protect the country from future flooding and increasingly extreme weather events. The review will be published in summer 2016 and will be led by the Chancellor of the Duchy of Lancaster Oliver Letwin. It will include input from Defra, DECC, DCLG, HMT, the Chief Executive of the Environment Agency and the Government’s Chief Scientist.

A new Cumbrian Floods Partnership group has also been formed to “consider what improvements to flood defences in the region may be needed, look at upstream options for slowing key rivers to reduce the intensity of water flows at peak times and build stronger links between local residents, community groups and flood defence planning.” The Group will publish a Cumbria Action Plan in summer 2016.

Two funds were set up to to allow people to donate money to support repairing the natural environment affected by Storm Desmond. These were the Ullswater Environment Recovery Fund and Fix the Fells. You can find out more here.

The village of Glen-ridding flooded for a second time on the 9 December. Widespread flooding was expected after heavy rains on Boxing Day as a result of Storm Eva, with the Met Office issuing a red warning for parts of Cumbria, Lancashire and Yorkshire. The was then followed by Storm Frank which resulted in significant flooding.

What have we done to make flooding worse? – BBC